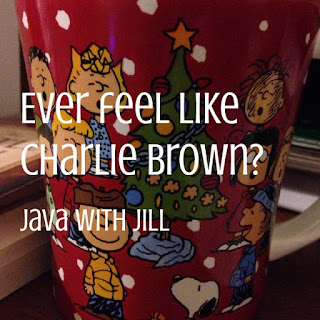 If you’ve known me for any time or read my blog for awhile, you know I am a Peanuts fan. After all, the name of my blog used to be “Coffee with Snoopy.”

Yesterday, my daughter took me to the new Peanuts movie for an early birthday present. I was really moved by what I saw.

It never really dawned me that Charlie Brown felt like a failure.

Thinking back over the comic strip and movies though, he does at times.

He can’t kick the football (mostly because Lucy pulls it out from in front of him), he gets tangled up trying to fly a kite, he falls when he tries to dance, his little Christmas tree flopped over with the one red bulb…and the list goes on and on.

This is a spoiler alert if you haven’t seen the movie:

The little red haired girl is in the movie. Charlie Brown thinks she’s pretty and wants to get to know her but doesn’t think he’s good enough. He even says, “She’s a somebody and I’m a nobody.”

Throughout the school year, she sees the things he goes through and all that happens. At the end of the school year, they pull names out of the jar, then people volunteer to be that person’s pen pal.

When Charlie Brown’s name is called, everyone else lifts up a book in front of their face. But not the little red haired girl. She raises her hand and says, “I will be his pen pal.”

Charlie was shocked..and before the end of the movie, he had to find out why she volunteered. He finally makes it to her and asks… by saying, “Why did you pick me? Because I’m a failure and you feel sorry for me?”

I can’t quote what she said word for word, but in a nut shell she says, “I saw you being compassionate towards your sister, I saw you be kind, you did the book report for me when I was taking care of my sick Grandmother…”

She saw the REAL Charlie Brown. Not the one he sees.

He sees our hearts. He knows our motives.

We are NOT failures to GOD!

My Pastor always says, “Failure is an event, not a person.”

I believe that statement to be 100% true!

If you have ever felt like Charlie Brown felt about himself… do me a favor.

Look up the Scriptures that tell you what GOD thinks of you!

Don’t rely on any human beings.

We tend to ebb and flow with emotions and all.

God’s Word is true and it does not change.

Here are a couple:

John 3:16 says, “For God so loved the world that He gave His one and only Son, that whoever believes in Him will not perish but have eternal life.” (NIV)

Also, Ephesians 2:10 says,“For we are God’s masterpiece. He has created us anew in Christ Jesus, so we can do the good things he planned for us long ago.” (NLT)

You are a masterpiece created for GOOD.

It’s my prayer and God will move in your heart today and renew you. I hope you feel Him near and let go of the negative thoughts about yourself.

You are loved! Just the way you are.

Going To God First! →
← Are You Hiding From God?