“Hope deferred makes the heart sick, but a dream fulfilled is a tree of life.” Proverbs 13:12 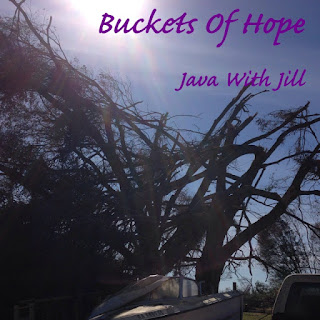 Friday and Saturday, I volunteered with Albany Relief and Recovery to pass out what they call, “Buckets of Hope”.

This is a bucket that a ministry provides during disasters. I haven’t seen inside of one, but I heard they have cleaning supplies. It’s something to take a little while after the devastation, which is what I did. This helps people know they are still thought of.

I drove in areas I have not been yet. And let me just tell you, it was heart breaking.

Metal in the tree

More metal in the trees

This one gas station I have stopped at many times is gone. It’s metal awnings are bend and wrapped up in the trees a good bit down the road behind the store.

Friday, most people were not home. So I didn’t have a lot of one on one interaction with people.

Yesterday, being Saturday was different. All of the people were grateful for the bucket.

Then, yesterday afternoon, Carlos rode with me. He is with Americorp. He’s a 20 year old Latino kid who loves helping people during disasters. That’s why he joined the Corp. He loves everyone. I enjoy spending time with him because he’s so bubbly and constantly says, “Your town is so beautiful. I just love it.” 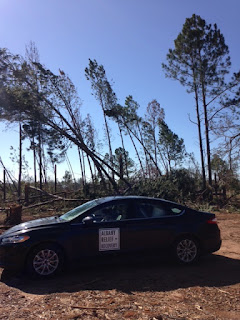 We went to one house, and the gentlemen there kept us talking a little while. He asked questions about us, and told us a little about him. He was in his 60’s and getting ready to wash his truck he said. He’s a retired Marine. He thanked us for the bucket and we got in the car to take more to people on his street.

At his neighbor’s house, we were greeted by three dogs. They charged at my car barking, so we weren’t sure if they were friendly. A lady came on the porch, and said they wouldn’t hurt us. So we told her who we were and what we were doing. She was so thankful. She told us about the fact that she wasn’t home during the tornado, but her son was, and she showed me the only place he knew to huddle down. The trees in her back yard haven’t been cleaned up at all.

She was lonely. We ended up there for an hour. She told us story after story and a good deal of Albany history. It was a neat experience.

These people are getting their homes and yards back together a little bit, but I could tell yesterday that their emotions still need to be prayed for.

Will you join me in that? Pray for emotional healing for people. Like I’ve said before, I am now afraid during storms, but I haven’t had any damage. (Thank the good Lord.) So, I can only imagine how the people who were affected feel. They really need buckets of hope, but real ones and emotional ones.

Like the Scripture in Proverbs says, when people don’t have hope, they get sick. As Christians, we should be spreading God’s hope and love everywhere we go.

Boxed Christianity →
← Let Your Past GO!